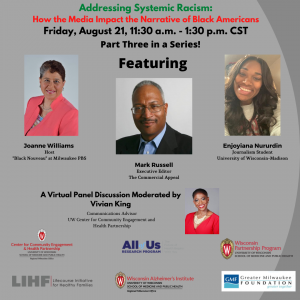 More than 200 people joined the UW- Madison Center for Community Engagement and Health Partnerships in Milwaukee’s third webinar, “Addressing Systemic Racism: How the Media Impact the Narrative of Black Americans.”

This panel, including a newspaper executive and veteran print journalist, veteran broadcaster, and current UW-Madison journalism student, offered an opportunity for the attendees to hear about a broad viewpoint of journalism in the past and present, and a look into how future journalism and journalists are being shaped by current events and media practices.

Williams said the conversation about racism in media narratives is not new to her, although current civil rights protests have certainly renewed the debate.

“I’ve been thinking about this since I started in television news,” she said. “The technology has changed, but some of the attitudes haven’t changed.”

Social media, 24-hour news cycles, and other current media practice have meant less time and focus devoted to standard reporting, the event attendees said, and news stories can be posted online without editorial oversight, leading to more opportunities for spreading un-concsious bias from the reporter or news room. True reporters will still follow strong reporting standards, however, and the news consumer also ability to fact check and be aware of where the news is coming from, Williams said.

“True journalists will get to the facts,” she said. “And we as consumers have to also take responsibility for what we are consuming.”

Gina Green-Harris, Director of WAI Regional Milwaukee Office, introduced the webinar with an announcement that the event series will be held monthly through 2020. The events are intended to not only spark conversation, but also lead to practical changes organizations and individuals can undertake right away, she said.

“I actually believe we have solutions,” she said. “And it doesn’t have to take ten years to do it.”

The Addressing Systemic Racism is hosted by UW-Madison Center for Community Engagement and Health Partnerships in Milwaukee, partnering with the Regional WAI Milwaukee Office.

Past webinars in the Addressing Systemic Racism series have examined the root causes of systemic racism in the United States and the role they play in the current COVID-19 pandemic. Find a list of past event sessions and their recordings here.